Blog #1: African Immigrants and Refugees in Europe: A PAN and BAJI Investigation

Nunu Kidane, Director of Priority Africa Network (www.priorityafrica.org) and Gerald Lenoir, Director of the Black Alliance for Just Immigration (www.blackalliance.org) are spending two weeks in Italy and Greece to learn more about the plight of African refugees as they make their way to Europe to find work to support themselves and their families back home. They are also attending the Global Forum on Migration and Development and the People’s Global Action on Migration, Development and Human Rights, both in Athens. This is the first of several reports they will be filing about their impressions, conversations with migrants, and what they are learning. 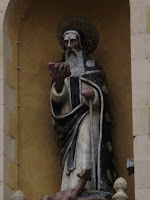 We were fortunate to spend two days in a small coastal town of Agrigento where in the central part of the city stands a Catholic church with the figure of a black priest carved in stone perched high above in the church tower. It is a statue of Saint Calogero, an African priest who came to Sicily around the 14th century and is revered as the town’s patron saint.

But in the 21st century, African refugees who traverse the treacherous waters of the Mediterranean Sea find Calogero’s city, indeed the entire country, unwelcoming, even hostile to them. A well-known Italian Bishop is said to have remarked that if the saint-priest were to arrive in Agrigento today, he would find himself in similar circumstances as the refugees who are detained and disdained.

Agrigento is situated far west in the region of Sicily, an island off of the coast of mainland Italy (see map). We spent the

better part of two days in the city at Progetto Tarik, a shelter 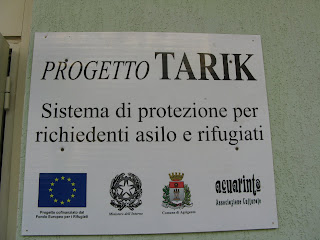 for male migrants from many countries, including Eritrea, Nigeria, Somalia, and Sudan—37 men ranging in age from 19 to 37. We ate with them, sipped cappuccinos with them and even attended an Italian language class with them. During the course of our stay, we were fortunate to gain their trust and engage in personal conversations about their migration experiences, their hope and dreams, their frustrations and setbacks. They opened up to us and shared the details of the nightmare that they had experienced.

While we try to capture much of what they told us, it is impossible to convey the full account of the emotional highs and lows we all felt in response to their stories. These young, intelligent, beautiful men had stories that were hard to believe and yet were told calmly and at times, even with humor.

They came from Eritrea to avoid forced conscription into an army that had no time limit; many were forced to act as the personal servants to high-ranking officers. They came from Darfur, Sudan to escape war, from other parts of Sudan fleeing from forced conscription and repression, from Nigeria escaping the conflict in Niger Delta and from Somalia to escape from a so-called failed state and a never-ending war. Whatever the reason for their departure, their asylum cases depended on whether or not they had a good case for substantiating grounds for fear of persecution which is the basis of the U.N. Refugee Convention protection for asylum seekers. Those escaping poverty or looking for better opportunities for themselves and their families would be considered “economic refugees” and subject to automatic rejection.

All of the young men we talked to arrived in Italy aboard crowded boats that set sail from Libya, normally, just a day’s sail 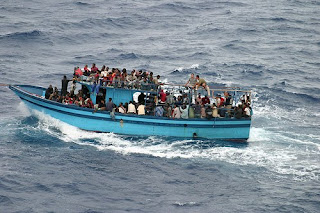 across the Mediterranean Sea to Lampedusa, an Italian port further south. One of the Eritrean young men reported that his voyage took five days, the most excruciating experience he had been through in his entire 19 years.

The sea is infested with “big fishes” that circle the small boat at all hours. At night, there is total blinding darkness. During the day, the heat from the sun is relentless with no water to quench their thirst. The salty waters are “like acid” as their skin begins to peel off from the intensity and dehydration. Of the 300 migrants on the boat, there were a few women, one of whom was eight months pregnant. Assuming they would reach their destination in a day, they had no water and no food.

He recounted that the deaths begin to happen the longer they are at sea. But that most die, ironically at the moment of sighting a rescue ship when panic sets in as each individual competes to be first to go up the ladder to safety. It is a fight to death as people get pushed aside, some falling into the sea, others remaining on the boat when the rescue ship departs having filled its quota. Those who have not been picked up know this is their last chance. With no food or water, it is a matter of hours before they would die in the sea. 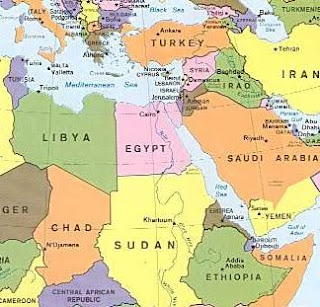 Before embarking on their voyage across the Mediterranean, almost all of the young Eritrean men left their country by making their way to neighboring Sudan. From there, they embarked on the perilous journey across the Sahara Desert. Another 20-year-old Eritrean man recalled memories of sand as far as he could see, of thirst beyond belief, of the daily fear and uncertainty about living another day, of the people who died along the way and were buried in the sand, nothing to mark their graves, just a mound of sand. Each mound in the otherwise flat desert was an indicator of someone who did not make it. He wondered if that would be his fate.

The migrants are loaded on trucks packed as tight they can fit. A young Eritrean teen recounted a story of a Somali boy who had been seated very close to him for the better part of the journey. When the truck stopped and it was time to stretch their legs, he stood up to find the body next to him slumped and fell. He suddenly realized he had been sitting next to a corpse for the past few hours. His expression was somber when he remembered the moment.

“I had never seen a dead body before, his eyes remained open as if he could see… I didn’t know what to do,” he told us. Like others before him, they buried him, but not deep in the sand. No one had the energy left for a proper burial.

We asked about their families, those they left behind, evidently a difficult and emotional topic for the young men who have not seen their loved ones in a long time. The Eritreans know that many of their families have been imprisoned or subjected to huge fines by the government because of their departure.

Each trip across a border is undertaken with the full realization they may not survive. This is especially true when leaving Tripoli (Libya) where the Mediterranean Sea leaves no trace of a body. Each young man told us that they leave word behind with trusted friends at different point in their journey in case they do not make it to their destination. They said leaving word behind gives them comfort knowing that should they not make it, their families will at least know of their demise.

Many felt dejected after reaching Europe and not finding the promised land of their dreams. They expressed frustration with the endless bureaucratic entanglements that kept them in camps, detention centers and with little hope of education, employment or supporting the families they had left behind.

All of the young men we talked to said they left home largely to find ways to improve conditions for their families back home by sending money back. But Italy does not offer them employment or cash assistance, education is limited to language classes, and they have no means to improve their lives. Once in a while, an individual is able to work as a day laborer and earn a small amount. But a good portion of those earnings are spent on phone calls and Internet access in order to stay in touch with their loved ones at home and in other countries. 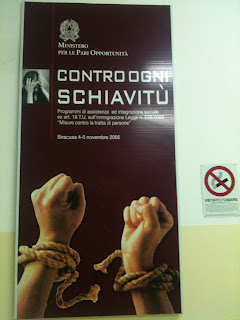 Despite these horrors, the young men were not depressed and in a state of remorse over their journeys. They shared their stories openly and with a sense of hope (and trust) that we would convey their messages broadly. They expressed no regrets of what happened in the past but were pessimistic about what the future holds. They have been in Italy anywhere from four months to three years. Although grateful for their lives, they foresee no change in their circumstances.

They have the temporary permits to remain in Italy and can travel to other parts of Europe. But they are not allowed to remain in any other country, only the first point of landing. One young man told us that he managed to get to Switzerland, where refugees receive much more government support. So desperate was he to get out of Italy, he used a lit cigarette to burn the fingerprints off of his ten fingers. He was caught and detained until his fingers were completely healed. Because of the fingerprinting system that is shared with border control agencies throughout the European Union, he was immediately deported back to Italy.

Despite all they had been through, these young men are realistic, reflective of where they are and what the future looks like, and most of all, able to laugh at the insanity of it all.

On the last day of our visit, there was news of the arrival in the port of Lampedusa of a large contingent of refugees, mostly Eritreans, Ethiopians, Somali and Sudanese. This was indeed surprising news as the recent agreement between Libya and Italy had almost ceased the boat arrivals. Libya received several billion Euros in exchange for detaining and preventing refugees from making the journey across the Mediterranean Sea. The bilateral agreement was celebrated in Italy as a major victory for the right wing government of Prime Minister Silvio Berlusconi. According to Berlusconi, the pact would put an end to the refugee problem. For migrants now trying to get to Europe, the cost of the journey across the sea alone has gone up from $1,200 before the Libyan blockade to $2,800.

The facts of the boat’s arrival as we learned later in the day were that it contained 298 refugees who had been rescued at sea in bad condition. About 15 were women and 9 children. One young Somali man was dead for reasons that could not be determined. Fearing the breakout of illness because of this, the entire group was quarantined and prevented from meeting any outsiders, including members of the media.

As the stories unfold in the course of our visit, we will continue to share with you the details of our findings.

•By request of many of the young men that spoke with us, we are unable to share the names or photos; they fear reprisals against them or members of their families back home.

•This investigative mission was supported by a grant from USA For Africa and the facilitation and logistical assistance of Manfred Bergmann from CADI (Comitato Antirazzista Durban Italia). Many thanks also to the Director of Progetto Tarik, Gianluca Avanzato.

Posted by Gerald Lenoir, Executive Director at 12:50 AM